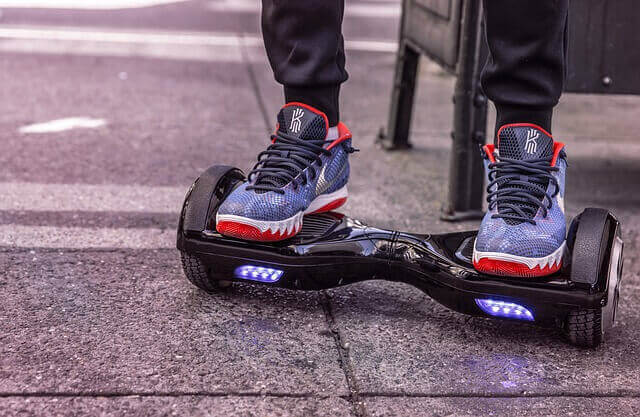 This article answers the question – ‘Can you sit on a hoverboard?’ Firstly, before answering this question, it is important to understand what a hoverboard is.  What is a hoverboard? A hoverboard, also known as a self-balancing scooter is a two-wheeled Lithium powered self-balancing transportation machine. History suggests that the first usage of the name ‘hoverboard’ dates back to 1967. It was used in a Science fiction novel titled The Hole in the Zero by the British novelist M.K Joseph. And later went mainstream through the influence of the 1989 movie, Back to the Future. The hoverboard has since been modified from its first mundane designs to state of the art designs that have included lights, music players, etc. There have been more incredible modifications due to the insatiable need of hoverboard enthusiasts. This enthusiasm has birthed such designs as the Logo hoverboard that comes in an extra added weight and very flamboyant due to its numerous colors that make it so attractive, a 4×4 hoverboard which was modified to include an extra carriage, among others. In this article, which seeks to answer the question- ‘Can you sit on a hoverboard?,’ it is paramount we also answer the question- ‘Is hoverboard allowed everywhere?’ If no, then why not? This takes us to the next segment of the article.

Can you sit on a hoverboard?

I don’t know why some people want to sit on their Hoverboards but I get it, we all have different tastes and would like to have fun sometimes in strange ways, the answer is YES you can, but without using a utility or an invention called HoverSeat.

A HoverSeat is basically a chair with two wheels that you can attach to your hoverboard in order to sit on it easily, it’s available on Amazon if you’d like to have one.

I must warn you, it doesn’t work with all models, only ones with the round middle, check out their page on Amazon to understand what I’m talking about.

The good thing about this HoverSeat is safety, you’re safer sitting on the hoverboard other than just riding it, when you hit a rock or a brick wall you won’t fall off the hoverboard.

Check out HoverSeat on Amazon

The ban of the hoverboard was inspired by the brief fire in a shopping mall in Houston on the 28th of December, 2015. This disaster inspired a review into certain manufacturing components of the hoverboard that gave certain relative causes of the explosion. One of such review bodies was set up by Delta Airline which found such causative as the batteries powering the hoverboard was above the federal specification of 160-watt hour limit. The airline, therefore, went ahead to ban the hoverboard and labeled it as part of dangerous goods banned from being on the aircraft.